You are here: Home / STREET PREACHING RESULTS IN 2020.

STREET PREACHING RESULTS IN 2020 From My Missionary Events.

See my calendar of preaching events.

Again I say unto you, That if two of you shall agree on earth as touching any thing that they shall ask, it shall be done for them of my Father which is in heaven.
—Jesus from, Matthew 18:19, KJV

All the numbers in this columned page of Street Preaching Results In 2020 are my estimates, based upon my counting of people walking by and individual vehicles driving by, over the minutes and hours and days of street preaching; the numbers appear somewhat consistent because of the scheduled corners that I preach from consistently. God does the real recording of work that gets rewarded, that’s scriptural. After each day’s preaching event; I write down/log the hours, tracts, souls, and make notes of the people that I meet and write their names on my Daily Prayer list (sheets of paper). The numbers in each of the months are totaled each day from my ministry calendar, which shows my scheduled events, activities, dates, and times. Then in prayer, I mention each and every name to God, seven days a week. What I need to be better at is logging the stuff people give to me while I’m preaching, things like a water, or a coffee, or a sandwich or a meal. I faithfully and publicly log any and all donations. It’s amazing how people are so generous and willing to give, especially when they can see a serious street preacher doing the gospel… preaching out where the sinners are… and the preacher is on a street corner… not in a church pulpit! It really shocks the people… I love all the reactions that I receive… good and bad… praise and mockery. Thank you for your love and grace and support and all the unique decisions!

ALL SUPPORT/Donations are NOT Tax-Deductible.

Then saith he unto his disciples, The harvest truly is plenteous, but the labourers are few; Pray ye therefore the Lord of the harvest, that he will send forth labourers into his harvest.
—Jesus, from Matthew 9:37-38, KJV

“Touching One Million People For Heaven, Every Year; until Jesus returns!”

STREET PREACHING RESULTS IN 2020; can be concluded that daily and consistent preaching can add up to thousands and thousands and maybe millions of souls being touched for heaven. This is the first time in my ministry career that I’ve actually street preached, as a profession, sort of speak. In 2019 I completed seven months of street preaching. Now in 2020, I plan to continue through for the entire year preaching, ministering, and building Gospel Evangelist Church, God willing. You can check out my results for 2019, here.

I can see that this year of 2020, I have a great opportunity in front of me to be able to reach my 2020 Harvest Goal of “Touching One Million People For Heaven!” From my point of view, this action is THE MOST IMPORTANT THING anyone can do… AFTER they’re saved. I see that after you’re born again, the next thing is to preach the gospel… then after preaching, ministering, and building the kingdom of God… pray, read your bible, go to church, tithe, give, and all the other stuff we can fill our time with as a Christian. On the other point of view (not mine); most Christians are taught the opposite of this; and therefore never get to the main job of leading anyone to Jesus Christ! How people get saved here in the USA, is a mystery to me… other countries are exploding with new believers every day! Maybe 2020 will be a year of salvations for Americans? In my little world, it is all I do…

“JOHN CHOQUE is Touching One Million People For Heaven, Every Year; until Jesus returns!” WHY NOT JOIN ME… THANK YOU… and Do Something Different! Let’s understand with wisdom, the time line that all of us are on. It is important. Yes it is!

Would you prayerfully consider supporting this kind of ministry labour in the work of the Lord? By labouring with me in support, both of us get compensated for our efforts by God. Remember, the best is that YOU go out and do the work… then help other preachers, by giving and supporting. I must also include, that just being on my daily prayer list and receiving my Sunday Prayer Letter is a wonderful benefit to me, and to both of us!

Thank you for your bountifulness and cheerfulness in giving, in Jesus name. Amen! And thank you Heavenly Father for providing me with this wonderful and amazing opportunity to be a witness for the Saviour and Lord Jesus Christ, the Son of God! And thank you very much for our Street Preaching Results In 2020. Amen!

Be In Touch with Preacher John.

“Say not ye, There are yet four months, and then cometh harvest? behold, I say unto you, Lift up your eyes, and look on the fields; for they are white already to harvest.”
—Jesus from, John 4:35, KJV

8 Say I these things as a man? or saith not the law the same also?

9 For it is written in the law of Moses, Thou shalt not muzzle the mouth of the ox that treadeth out the corn. Doth God take care for oxen?

10 Or saith he it altogether for our sakes? For our sakes, no doubt, this is written: that he that ploweth should plow in hope; and that he that thresheth in hope should be partaker of his hope.

11 If we have sown unto you spiritual things, is it a great thing if we shall reap your carnal things?

12 If others be partakers of this power over you, are not we rather? Nevertheless we have not used this power; but suffer all things, lest we should hinder the gospel of Christ.

13 Do ye not know that they which minister about holy things live of the things of the temple? and they which wait at the altar are partakers with the altar?

14 Even so hath the Lord ordained that they which preach the gospel should live of the gospel.
—Paul from, 1 Corinthians 9:7-14, KJV

If you’re a believer, filled with the Holy Ghost, give yourself continually to prayer, and to the ministry of the word, and diligent in preaching to win lost souls for the kingdom of heaven, also believes the King James Bible; then let’s build together! The Comforter is teaching how to: prepare and make; a filled, low, straight and smooth… Gospel Evangelist Church: GEC Truth Study – GEC House Gates – GEC City Concourse. Be in touch with Preacher John. Oui?

As it is written in the book of the words of Esaias the prophet, saying, The voice of one crying in the wilderness, Prepare ye the way of the Lord, make his paths straight.
—Luke 3:4, KJV

Greetings! Now here is an episode that talks about someone that is not a very good example. I won’t write his name here, you just have to check this one out!
—JC.

You Can Listen To All Of Preacher John’s Shows In Your Favorite APP. Enjoy! 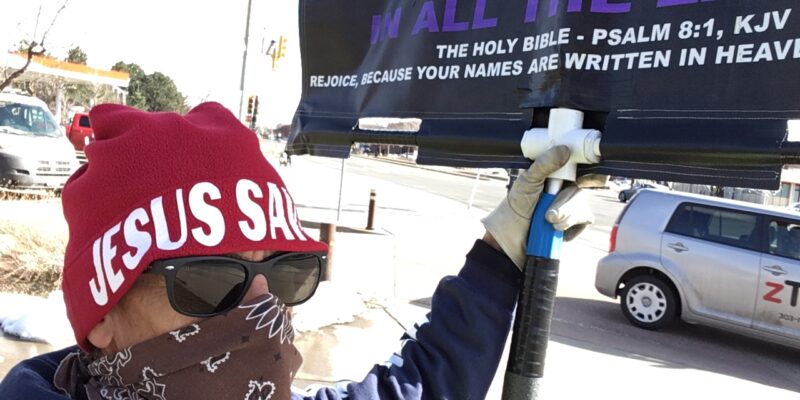