Most of Thursday was in deep thought of this strange feeling inside me of how my government decided to pass this law making it illegal for my company to help pay for my health insurance premiums through a small cash bonus reimbursement for the high insurance premiums that I pay and all of us pay! Just writing this is making me feel odd and frustrated with my government.

Right after praying, for all the stuff I pray about, this thought came to me about how our government could very well and easily pass another law making it illegal to pay your employee if they do not have an “Identifying Mark On Their Person – Either Wrist or Hairline”. Hey, this is very doable by our government, and it will NOT matter if you are a Christian, a Muslim, an Atheist, or Undecided.

Oh I know and I hear the people saying, oh that Preacher John, he sure gets radical and is so negative about things. Why does he point things out that are negative and not of happy things? I can hear it all now, but that does not sway me into being passive and glib about this paramount issue facing every single individual on the planet, but first here in the United States.

You wait, Unites States law passed it is now illegal to have an employer cash reimburse you for health insurance. July 1, 2015, is the date of effectiveness. The law was passed on January 1, 2015. This is only the beginning folks! As the days roll by and the unfolding of the “Affordable Care Act,” commonly known as “Obama Care,” reveals itself you will also, along with me be astonished at the scope and depth of this landmark law! But hey, the American people voted for this great new change President, Barrack Hussein Obama. I think the voters or however Obama gained office for two terms, are unaware of what is happening in our government. Maybe the people don’t care? Friday July 10, 2015.

For the last many years I have withdrawn my voter status in America. I am a Viet Nam Veteran and I am ashamed at how this country has acted toward its own citizens and toward the citizens of the world.

Now I am encouraged to reactivate my voter status, because of this next presidential ruling office, cabinet and team. Donald J. Trump for President is where my vote is going.

Where will you be on voter day? I will be casting my vote and even as I write this blog post, I am casting my vote! I am publicly proclaiming that as a United States Citizen and Taxpayer, I want America to Be Great Again!

As I just wrote and clicked saved, I felt odd inside. Why? Because this is the first time that I have written about anything to do with politics. As an employee, government usually doesn’t play a big role in our lives. Now, as a business owner, the government is critical and key to success in business. The company that I drive for, is involved in the political process to some degree because if they were not, well, business would probably be terminated due to lack of legality. A company must remain legal to operate in our government.

I need to seriously ask you something. What are you planning to do when your government passes the law that says, it is illegal for a company to pay the employee without the required ID?

Did you answer the previous question?

It is a serious question and one that demands a response.

Just because you say, “I am a Christian and God won’t do that to me” is not the proper response.

My suggestion is to pray.

Friend, if for some reason you do not know if you were to die tonight you would go to heaven, then pray this, “Jesus, if you’re real, here I am.”

With much respect for you,

Greetings my friend! I’ve publicly posted this calendar to be accountable for “Touching People For Heaven” by preaching, interceding, tracts, writing, publishing, podcasting, filming, teaching, and ministering the LORD JESUS CHRIST in 2022. You can also see our GEC—Preaching Calendar for all our missionary events. We’re on the streets of Boulder, Colorado… Sunday thru Thursday and out of town every Friday. Working 6 days a week in 2022. Let’s preach together!

Are you born again and filled with the Holy Ghost? Are you a labourer in the Lord’s harvest? Do you give yourself continually to prayer and to the ministry of the word of God? Are you full of the love of God and love for people? Are you diligent in preaching to win lost souls for the kingdom of heaven, also believes the Authorized King James Bible? Then, Let’s Build Together! The Comforter, which is the Holy Ghost, is teaching us all things, and showing us how to: prepare and make; a filled, low, straight and smooth…missionary church and street ministry: for touching people for heaven. All glory to Almighty God!

As it is written in the book of the words of Esaias the prophet, saying, The voice of one crying in the wilderness, Prepare ye the way of the Lord, make his paths straight.
The Holy Bible — Luke 3:4 King James Version.

BE IN TOUCH WITH JOHN. 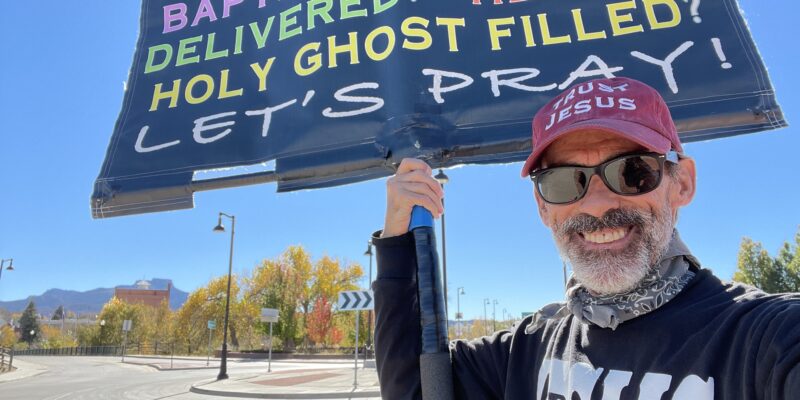